Scriptologist.com, an online magazine, spoke with Elaine Bossik about her new novel, The Last Victim.

Scriptologist.com (Q): Where did the idea for The Last Victim come from?

Elaine Bossik (EB): I was in a writing workshop where writers share their writing and offer critiques and suggestions. I wrote what I thought was a short story, but it was really a vignette. The group encouraged me to continue the story and develop the characters. This vignette turned out to be the first chapter of my novel.

Q: Did you plot your entire story before you started writing?

EB: I had to know the beginning, the middle, and the end before I started writing. For me, I have to know my ending so I know where the story is leading. Often things change as the writing progresses. But every action must lead to the ending.

The plot and the characters can’t really be separated. I knew who my characters were—their motivations, their histories. Once you understand your characters, you know what they will do in every situation and what they will say to each other. I like to think of my story as a play, with the characters acting out their lives on the stage of life.

Many things change along the way when I write because the characters have a life of their own. Sometimes they do and say things I didn’t plan on and the story spins in another direction. I always ask: “What if…” For example, what if a character said this or behaved in a certain way I didn’t plan on originally? How would that change the story? That’s what I mean about characters taking on a life of their own.

Q: Your characters are so well developed and seem so real that I have to ask you if you were writing about people you know?

EB: I think every writer writes about real people. Otherwise the characters would seem very wooden. Many of my characters are composites of people I know. I give them the characteristics I want them to have so they can clash with each other. That creates drama. It’s like putting two people in a room who are the exact opposite in personality and then watching what happens.

Q: Why is obsession such a strong theme in your novel?

EB: My antagonist, Sophie Rothman, is driven by obsession. In this case, an obsession to accumulate money for its own sake. Sophie’s obsession is not an ordinary one, it’s twisted, it’s extreme, and it’s what drives all her actions.

Q: Readers are astonished by the strength of this character, Sophie Rothman. Yet she seems so real. How did you create such a character?

EB: We all know people who are obsessed with money, who hoard money, who are stingy. Sophie is a composite of all the people I know like her. Only with Sophie, the obsession is extreme. It’s her tragic flaw. And it makes for wonderful dramatic conflict.

Q: How did you choose the geographic settings for your story?

EB: I grew up in Brooklyn, NY and I wanted my story to begin there because I could describe all the places I was familiar with.

Q: Your story moves to Israel and the Masada excavation in the early 1960s. How were you able to describe this archaeological dig in such precise detail?

EB: I did a great deal of research so that I could be accurate about everything—the discoveries made there, descriptions of the ruins, the camps where the archaeologists lived. Authors who write historical novels do an enormous amount of research so that they can recreate time, place and events. That’s the fun part of writing. You have to imagine that you are in the skin of your characters, living in a certain period of time, in a certain place, doing what your characters do, feeling what they feel.

But I did travel in Israel in the 1960s, so I was familiar with the settings I described in the story. It’s always easier to write about the things you’re familiar with. You can recreate a time and place in much more detail and with more accuracy when you have experienced it.

Q: Your descriptions are so vivid that readers feel they are there at that moment in time. How do you achieve this? Is there some writing formula?

EB: When I describe a setting, I like to use all my senses because when we experience something, all of our senses are stimulated, not just our sight. We hear sounds, smell things, feel things and taste things. If a character is eating a meal, you need to describe how it tastes so the reader will experience it too. These are the details I feel are necessary to recreate reality.

EB: This theme grew out of the actions of the antagonist who was driven by her obsession, and by the path chosen by the protagonist, Jeanie.

Q: How did you achieve the heightened drama in the climax scene between Sophie and Jeanie, when Sophie learns the identity of Jeanie’s fiancé?

EB: I think the drama is heightened because the reader knows the truth for some time, but the characters don’t know until this climactic scene. So there is the added drama of the reader anticipating this climax and wondering how the characters will react and what will happen to them.

Q: Why was the pursuit of one’s dream such a crucial theme in this novel?

EB: I believe that having a dream is a universal theme. Everyone dreams of doing something, achieving something in life. Dreams drive our actions. And our actions overcome obstacles in our path. Every character in The Last Victim is motivated by a dream. Their dreams drive their actions and precipitate conflicts between them. That’s what creates the drama. 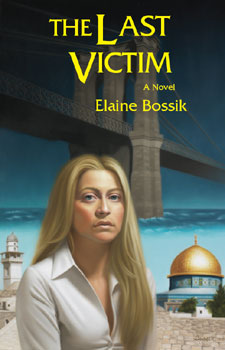